Petroleum coke, abbreviated coke or petcoke, is a final carbon-rich solid material that derives from oil refining, and is one type of the group of fuels referred to as cokes. Petcoke is the coke that, in particular, derives from a final cracking process—a thermo-based chemical engineering process that splits long chain hydrocarbons of petroleum into shorter chains—that takes place in units termed coker units. (Other types of coke are derived from coal.) Stated succinctly, coke is the “carbonization product of high-boiling hydrocarbon fractions obtained in petroleum processing (heavy residues)”. Petcoke is also produced in the production of synthetic crude oil (syncrude) from bitumen extracted from Canada’s oil sands and from Venezuela’s Orinoco oil sands.

In petroleum coker units, residual oils from other distillation processes used in petroleum refining are treated at a high temperature and pressure leaving the petcoke after driving off gases and volatiles, and separating off remaining light and heavy oils. These processes are termed “coking processes”, and most typically employ chemical engineering plant operations for the specific process of delayed coking.

This coke can either be fuel grade (high in sulfur and metals) or anode grade (low in sulfur and metals). The raw coke directly out of the coker is often referred to as green coke. In this context, “green” means unprocessed. The further processing of green coke by calcining in a rotary kiln removes residual volatile hydrocarbons from the coke. The calcined petroleum coke can be further processed in an anode baking oven to produce anode coke of the desired shape and physical properties. The anodes are mainly used in the aluminium and steel industry. 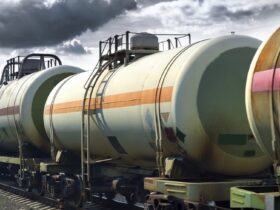 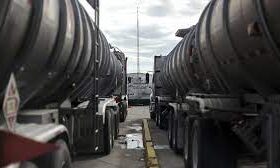